Since its creation in 1999, the SEAT Leon has always excelled in lighting. Each of its four generations has been ahead of its time, incorporating the most cutting-edge technology of the moment in a process of constant updating.

“The Leon has always been a benchmark, not only in SEAT, but in the compact segment as well. It has always incorporated the most efficient and powerful light sources to guarantee the safest night-time driving” explains Magnolia Paredes, head of Electronic Development and Validation in SEAT’s Lighting Department. She has been with the company for 20 years, practically the same number of years that the Leon has been lighting the way. ​ 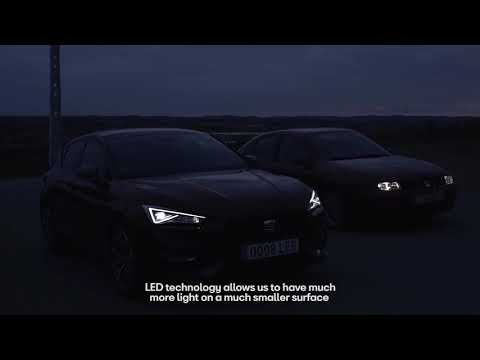 The pioneering light. Equipped with powerful halogen headlamps, the first generation signalled a turning point. “It was the first with a plastic outer lens, which made it possible to work without restrictions in terms of shape, experimenting with the illuminating surface. With the first Leon, the headlamps took centre stage as an essential part of the car’s design” says Magnolia. But it also incorporated the latest technology. For example, the angle of the fog lights, which were standard, could be adjusted by means of a control to achieve the greatest possible range without dazzling other drivers.

Automating light. Xenon lamps were introduced in the second generation. This technology offered greater luminosity (850 lumens compared to 500 lumens for halogen), 35% lower consumption and a longer life. “In addition, its whiter colour, with a colour temperature of 4,000 Kelvin, made it possible to reduce eye fatigue on long night-time journeys” explains Magnolia.

Between 2005 and 2012, the Technical Centre introduced innovations to the model, such as the automatic lights on function, taking the burden off the driver of the risk of forgetting to turn on the lights when entering a tunnel or car park. In addition, daytime driving lights were introduced for the first time, another major safety improvement, as well as LED rear lights.

LED standard bearer. The third generation was the first model in its segment to offer full LED headlights for all functions. This technology enabled a differentiated design, giving rise to the signature triangular-shaped light that is so characteristic of SEAT. “LED was a giant step forward, but at the same time a great challenge, as we had to develop control units for its operation” explains the head of Electronic Development. This Leon already had driving aids such as the automatic switch between dipped and main beams, a device that uses a camera located between the windscreen and the interior rear-view mirror to detect when there are other vehicles on the road, both those approaching head-on and those to be overtaken, and adapt the headlights so as not to dazzle them. ​

State-of-the-art lighting. The new Leon is the brand’s most technologically advanced vehicle, also in terms of its light clusters. “With more energy-efficient LED technology, the fourth generation represents a great leap forward in terms of light distribution on the road, as well as having greater range and width than the previous generation” says Magnolia.  It has two lighting levels, Eco LED, which offers up to 550 lumens of illumination on the road with the low beam and a range of 60 metres, and Full LED, with up to 900 lumens and a range of 70 metres. “Its whiter colour allows for better differentiation of the shape and colour of objects, a key factor in night-time driving” she adds.

Light safety. The fast reaction of the LED (a diode responds 150 milliseconds faster than an incandescent bulb) means that driving at 120 km/h, the driver behind reacts to the brake light 5 metres earlier. But the safety features of the new Leon’s lighting go even further. The interior LED light line around the driver warns if a door is closed incorrectly or if another car is approaching from behind when getting out of the car. “We’ll now add further innovations such as increasing the intensity as the driver accelerates, to make him or her more aware of speed, and if the rear doors are locked, to indicate if a child tries to open them” according to the head of Electronic Development.

A ceremony of light. “The new Leon is also the first SEAT vehicle with a welcome from the different light clusters” says Magnolia. The “Hola!” message that is projected onto the ground when the doors are opened, the progressive coast-to-coast illumination (continuous functional lighting that connects the tail lights) and a combination of colours of the interior LED light strip greet the driver. These colours, which accompany you on your journey, can be customised according to driving mode and mood: red for activation, green for relaxation and blue for a calm and stable atmosphere.

Required cookies are essential to let you move around the website and use its features, such as accessing secure areas, shopping baskets and online billing. These cookies allow our website to provide services at your request.

Functionality cookies are used to remember the choices you make, e.g. your user name, log in details and language preferences. They also remember any customisations you make to the website to give you enhanced, more personal features.

Targeting cookies collect information about your browsing habits to deliver adverts which are more relevant to you and your interests. They also measure the effectiveness of advertising campaigns.

This site uses cookies and related technologies for site operation, analytics and third party advertising purposes as described in our Privacy and Data Processing Policy. You may choose to consent to our use of these technologies, or further manage your preferences. To opt-out of sharing with third parties information related to these technologies, select "Manage Settings" or submit a Do Not Sell My Personal Information request.